Spring has sprung! It’s a warm and sunny Sunday and after a long, dreary winter Coney Island finally opened its doors to the public today! Luccas told us that there were gonna be a lot of freebies to celebrate this inaugural opening day, so off we went to enjoy the Sun, Sand, Sea and the spur of adrenaline rush.

Coney Island is an island an hour away from Manhattan. It’s said to be where the Jewish and Russian neighborhoods are, with a lovely theme park by the beach. #neighborhoodgoalsaf

We had lunch at Wahlburger, a burger chain owned by the wahl. It was alright. I still love me my Shack Stack.

We wanted to go to the pier to watch the sunset but the weather forecast had fooled us into thinking that it was gonna be a sunny day. It was – but it was cold and windy af. We didn’t make the trip there and watched the sunset from the subway instead. The sky was a beautiful gradation of orange, pink and blue – too bad the cold killed all our phones.

We went to Julia’s NYU residence to hang out afterwards. It’s so funny here in the US how they can only start drinking at 21 and with kids entering college at 18, that leaves a majority of them being on the illegal age of drinking, or at least purchasing drinks. Which is funny because a lot of worse things are a lot more accessible than that to these kids. Needless to say t’was a fun night.

Someone asked me about how much my cost of living in New York is.

Mika and I cook and share our groceries. On average we spend $50 a week for eggs, milk, bread, meat, fruits and vegetables at Trader Joe’s. I brought premium coffee beans from Indonesia. I grind and brew my own coffee, saving me lots of money that would’ve gone into Starbucks’ cash register. So we have $100 remaining weekly for shopping, entertainment and eating out.

This is how living on minimum wage feels like, and it’s not bad at all.

The day is finally here! i wasn’t done packing when I left the house yesterday for work. I ended up staying at Fania’s hotel room last night because the weather was so bad, I decided it wasn’t worth the trip back to my dusty, halfway packed room. I spent all morning packing and dismantling my furnitures. I shifted all my stuff to the living room and here’s what I’ve hoarded within the 3 months that I stayed in NYC:

me thinking of how I’m gonna move all this:

I brought only my essentials to my new place by lyft because Mika’s uncle was going to come to help move everything else the next day. I’m SO happy for that because I realized that I have A HELL LOT OF THINGS that I definitely can’t move on my own. And I definitely don’t want to spend money on a mover. Also, the amount of stuff that I had was worrying. I don’t know how we’re gonna be able to fit everything in Mika’s uncle’s car, regardless how big it is.

Unfortunately I didn’t manage to take a photo of it, but Mika’s uncle managed to fit EVERY SINGLE THING. My whole damn life in NYC in an SUV. That’s quite a feat – I’m still amazed and amused.

What a happy day. To the happier days ahead *

It’s Friday!! The day when the hustle slows and life kicks back in to the lifeless souls of the working class (me). Also, my Ultra Miami ticket came in the mail! My boss brought it to my desk and well this was the only thing that I got delivered to the office. Mustered up the courage and finally asked my boss about my leave for Ultra and he said yes!!!! Wheeeeee it’s finalized and Miami here I come~

Mika, Scott and I decided that Thursday/Friday be our happy hour day since Alley stopped organizing one. We’d planned to get this matcha mochi bun thing from 50th Street, but were too hungry to wait fo dat shit and shared my leftover bibimbap lunch. Scott had an awesome idea about opening a -gasm restaurant where the sole marketing effort will be instagram photos of patrons doing the this is x-gasmic face, as such:

We played tourist, had the most delicious Thai dinner and had the most diabetes-inducing DIY donut ice cream. We went to hudson hotel and explored the 3 awesome themed bars there, but decided that it was too early to go dancing. We checked out Tao – a super exquisite restaurant+club. This amazing place had a cinematic feel with steps and tables on the steps, with a gigantic Buddha facing the steps (this has been hard to describe, see photo). Somehow we felt like chilling and went over to Scott’s place at the Meatpacking district. Sam had the coolest vape (which was super pretty and apparently a product of some SV start-up) and we all smoked til we knocked out on Scott’s couch.

The next morning we went to get Shakshuka for breakfast at the Chelsea market. It’s apparently one of the hottest brunch food in NYC. It’s an Israeli dish made up of eggs on a bed of tomato and pepper stew. Mika and I shared that and a beef hummus.

Afterwards the Indian babe and I went to Stage 49 for the Holi in the city party! It was SO much fun ps. I’d never seen so many good looking Indians gathered in a place before, it was pretty damn refreshing.

After the party we headed for Alley and did our group project meeting on skype, after which I went to Rosemont at Williamsburg to party with Cadence and meet her ultra Miami bunch. They’re the wild ones and I foresee Ultra will be ratchet af.

Life is SO good right now apart from my house issue. But I’m a firm believer in ying and yang that is, for something good to happen, something bad has to happen too. Thank god for the bad that goes on in my life for I can handle them still. And for the good in my life, mostly the loved ones I have around me, for they’re invaluable beyond mishaps can muddle, beyond words can describe.

I could barely sleep last night. What went down in my house yesterday was pretty damn unbelievable lol fucking mental piece of shit can’t believe I’m living with someone like that.

As much as I hate the thought of having to go through the hassle of moving out, I feel like it’ll be best for my mental health to stay away from a psycho who thinks it’s perfectly acceptable to scream at others. China really has a different standard of normal and I should’ve listened to Lyn who was hell bent on me finding new roommates upon hearing that my 2 housemates were from China. By then it was almost too late and I was overtly optimistic. Now I get her.

Happier things – someone from JFK called Cadence on Friday saying that my PINK luggage came! I was super excited but worried because my luggage ain’t pink? Nonetheless I made a trip to JFK for the third consecutive Monday morning, and guess what – when I reached the Swissport baggage service, the woman who helped me last week told me that she hasn’t heard about my luggage. My heart sank, and as I walked out of the room…

I SAW MY LUGGAGE

I was BEYOND OVERJOYED. No word could express my relief and contentment at the sight of my long lost luggage. I almost thought I’d never see it again, which is totally possible by the look of the millions of unattended luggage I’ve seen in the airport.

I went to NYU with my luggage looking like I totally just came back from a trip. The z virus hit and I slept throughout the second half of the lecture LOL.BUT I stayed up for the first and most important part of it which  was part of the homework, so I knew what to write.

I dropped my luggage at Alley and was headed to Hell’s Kitchen to check out an apartment I’m likely to rent out. Well well well… It’s $1.2k and I’d be totally fine with it if not for the landlord who’s asking for a 6 month deposit (I’m always scared to put such deposit in case they pull off a stunt and not return it to me – $7.2k is a lot of money to lose).

Bought dunkin donut’s sweet and salty cold brewed coffee (special request with very little sugar) since I missed my daily dose of homemade cold brew. It was fantastic! They use real good beans which is refreshing given the shitty coffee bean that Alley’s coffee machine has.

Came to work afterwards and Mika texted me “I’m cosplaying you today.” 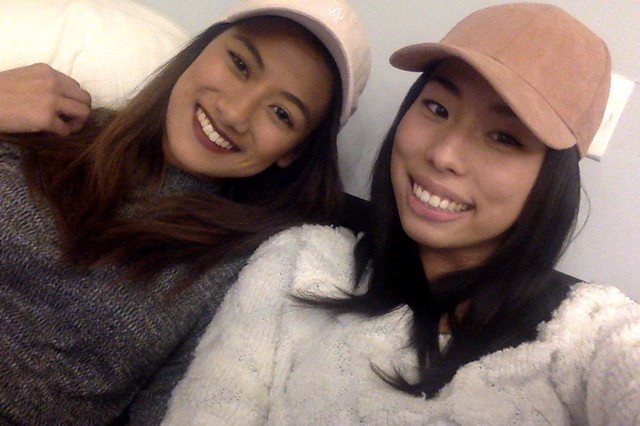 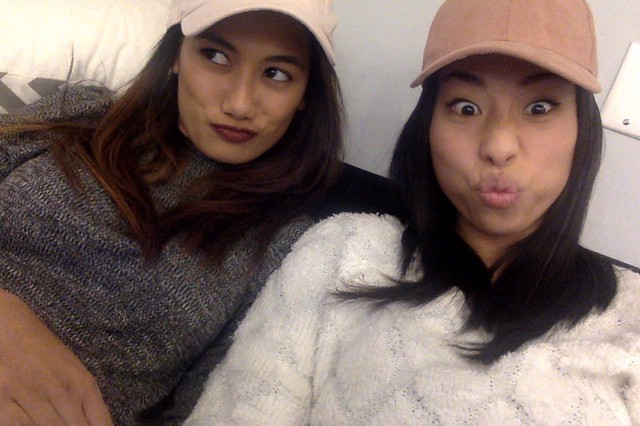 BITCHES BE TWINNING ❤ We both worked at the common area sitting side by side, Macbook Pro propped up on our laps. Everyone who walked past practically told us we look exactly the same. This girl’s such a bundle of joy. We’ve only known each other for a month and we’re BFF already – it doesn’t take long for 2 people to know if they’re fated to be that and I’m SO glad to have found her. Love you mika hope we can find a room together it’d be SO awesome ❤

Went back to the shack and badai decided to be a nosy piece of shit. consulted with the girls about the situation and decided to go back to my house anyway since I needed to grab my gym outfit for tomorrow. Had a gr8 catch up with Pris. Fun fact we’re housemates but we barely see each other (we’re both always out and about and not together) and she seemed SO sad about me leaving, I felt terrible. I didn’t know me leaving would affect her so much given our acquaintancey relationship, but we bonded over small girl and shopping talks yesterday. I feel bad for leaving, but even worse to have to stay :<

AMINAH ABROAD
Create a free website or blog at WordPress.com.